Development for WordPress 4.4 started with momentum immediately after the release of WordPress 4.3.

This one should excite developers and users alike. WordPress will have much better support for responsive images in core. It will include all image sizes in the srcsetattribute, meaning the browser will choose the most appropriate image to use. This should conserve bandwidth and speed up sites across the board.

To achieve this, six new functions and two filters have been added, all having to do with that srcset attribute that makes it all possible.

Utilizing the new functions is a cinch, here’s an example from the developer blog that shows a custom image being displayed using the srcset to define the available sizes.

A new image size has also been added to core named “medium_large.” It will not be listed in the UI, nor will it be changeable from the settings. It will be 768px wide with no height limit. It has been added for better responsiveness, support, developers may, of course, change it with hooks.

The most obvious addition for non-developers are the new default theme Twenty Sixteen. I have to say that I did not take on this theme initially at all, but after seeing it in action I actually like it a lot now. 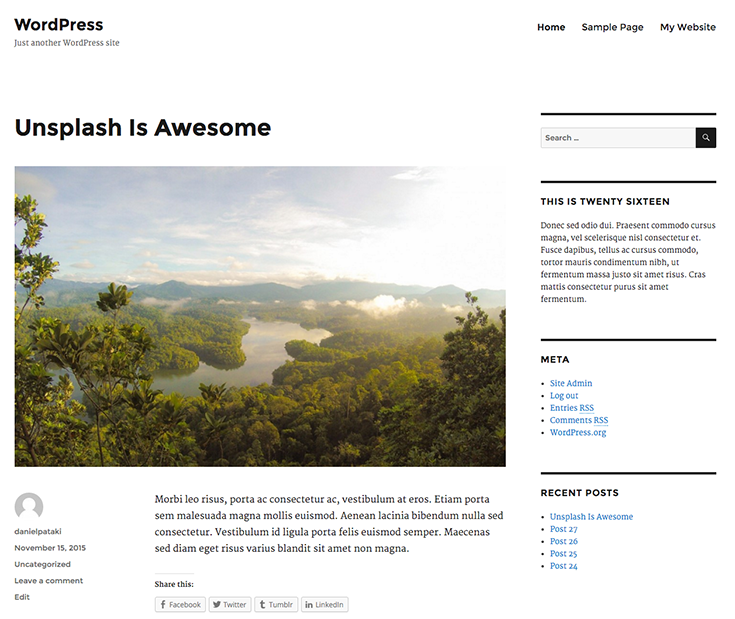 With its minimalism, great typography, and well-defined structure, I think this will be a great theme for the upcoming year, I look forward to showing everyone code examples with Twenty Sixteen as the backdrop.

You can download and activate it now, but you’ll need WordPress 4.4 to do so. If you don’t know how to grab developer versions of WordPress take a look at the final section in this article.

While I disagree with the development blog about the statement that “Without comments, a website is as effective at creating a community as the Chicago Cubs are at winning World Series titles,” this change is extremely welcome from a development and standardization point of view.

With WordPress is moving on to become a proper application framework using the REST API comments are not as important as they used to be, only for sites that are driven by that specific type of interaction.

In any case, making the comment system look and act a lot more like the posts system is great because it standardizes how everything works. In addition, the comment query has a bunch of new parameters. If you use comments extensively, take a look at the changes!

WordPress has been using Embed for a while now to allow you to add content from many sources. With 4.4, your website will become an Embed provider, allowing others to embed your content in the same way.

To embed a post from a website that supports this you just need to place the URL of the article on its own line, or between embed tags.

Undoubtedly, the biggest news is that the REST API will be officially merged into core. But hold off popping the cork of the champagne just yet as this is only part one of two. The infrastructure has been merged, but the endpoints have not. This essentially means that plugin and theme authors are happy, while client developers are not.

In other words: If you want to use the API in your plugin or theme you can start doing that by replacing admin-ajax.php stuff, for example. If you’re developing a mobile app or something that uses WordPress data externally you’ll still need to rely on the plugin for help.

This is a great step forward, though. It really looks like endpoints will be introduced in the next release, which will mean the inclusion of the full API.

What are you looking forward to in WordPress 4.4? Let us know in the comments below.